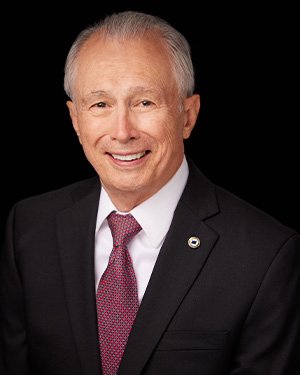 John and his wife moved to Mary’s Woods in 2015 after residing in our neighboring city of West Linn for 27 years. He is retired from the John Hancock Life Insurance Company where he was an investment officer responsible for building and managing a large portfolio of investments in the forest products industry through timberland acquisition and mortgages.

John is also a retired U.S. Army Colonel with 21 years of reserve and four years of active duty. He served one year in Vietnam as a logistical officer with subsequent assignments at various levels of command as well as staff assignments including food service, transportation, supply, and engineering. He also served as principal staff officer, both in personnel and logistics, to Major Generals.

After retirement, John served on the West Linn Planning Commission for seven years and the city council for one year before being elected mayor, an office he held for five years. He also served as a member as well as president of the Board of Directors of South Fork Water which processes water from the Clackamas River and supplies Oregon City and West Linn with fresh water.

He holds a B.S. in Forest Engineering from Oregon State and an MBA from Arizona State.

John and his wife, Merle, enjoy living at Mary’s Woods and have been advocates for healthy food and exercise. John has been on the Residents Council for two years and is the Past President.