Our story begins more than 150 years ago when 12 Sisters of the Holy Names of Jesus and Mary (SNJM) from Montreal disembarked from a steamer ship in Portland, Oregon. They arrived on October 21, 1859, at the request of Portland Archbishop Francis Norbert Blanchet, to establish schools in the Northwest territory. Although they carried few possessions, legend has it one of those possessions was a piano. They did, however, bring an abundance of faith, dedication and sense of mission.

When the Sisters set foot in their new home, Oregon had been a state for just eight months. Portland’s population was just over 1,200 and consisted mostly of wood frame structures with only a handful of brick buildings. These dedicated Sisters, only a few of whom were fluent in English when they arrived, quickly set to work and on November 6, just a few short weeks after their arrival, opened St. Mary’s Academy to the girls of the city.

With the success of the Portland mission, other Sisters were sent to Oregon, spreading across the state to found missions and open or teach in schools. In 1893, they established St. Mary’s College (Marylhurst University), the first liberal arts college for women in the Pacific Northwest. In 1906, the Sisters purchased property near Lake Oswego to establish a Convent, build a home for orphans, and expand the college.

1911 marked the dedication of the Convent of the Holy Names in Marylhurst — a name the Sisters created from the name of Mary, mother of Jesus, and hurst, meaning woods. 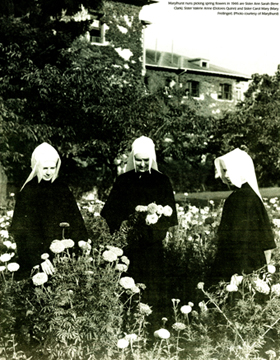 In 2001, the Sisters opened Mary’s Woods CCRC, a 501(c)(3) nonprofit continuing care retirement community in Lake Oswego. Mary’s Woods was developed on the historic and scenic lands owned by SNJM where the Order traditionally provided housing and care for Sisters at its Provincial House.

In founding Mary’s Woods, SNJM envisioned a senior living community in the Portland area that would provide a continuum of housing, health care, and educational services to both Sisters and laypeople in the community. Today, the 40-acre Mary’s Woods community is the fulfillment of that vision, and the magnificently renovated 1910 Provincial House serves as a centerpiece of Mary’s Woods’ vibrant community, with a variety of restaurants, meeting and event spaces, classrooms, a fitness center with pool, and the beautiful Chapel of the Holy Names.

Discover the story of Mary’s Woods

Find out more About Us »
TT + -
monitoring_health_check_string